This tool allows you to play tracks of moving units. There are four ways to build a track:

The most recently built track (on any tab) is selected in the Track Player automatically. However, you can switch tracks manually by choosing them in the drop-down list. The track is named after the unit it was built for, and the tab on which it was built is indicated in parentheses. 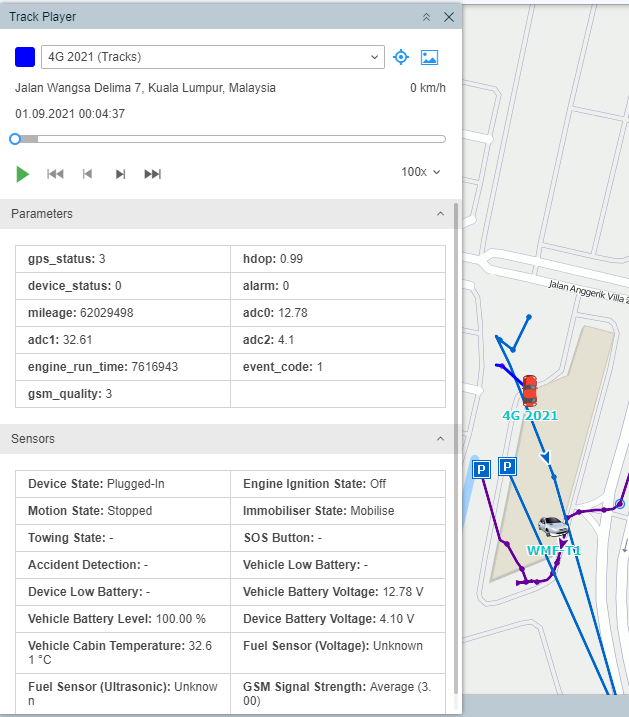 The map can be moved manually or automatically. This setting is adjusted with the icon

. If this option is disabled, you can only move the map manually. If it is active, the map moves automatically in the following cases:

If messages from the unit contain pictures, you can show or hide them during playback using the icon

Select appropriate playback speed from the drop-down list. It can vary from real-time speed (1x) to accelerated 1000 times (1000x, that is about 16 minutes of messages played in one second). Regardless of the selected value, messages with zero speed and no movement are played as fast as possible. If you change the playback speed while playing the track, a new value will be applied after you press Pause and then Play again.

You can play tracks both in the Tracks panel and Track Player.

to stop. When the playback is completed, the unit stays in the point of its last location.

When playing a track on the map, a unit icon and/or an arrow of the movement direction (depending on the selected unit presentation method) are shown. It is convenient to use rotating icons. The name of the unit whose track is being played is coloured in purple. While playback is performed, the real unit temporarily disappears from the map.

During playback, the address and speed for each message are displayed under the unit name, and the date and time are displayed above the timeline. Besides, if you have Google, you can track the movement of units along real streets. To do this, expand the Google Street View sections located below.

As the track is played, all data in these sections is updated according to the message being played at the moment. If there are images in messages, they appear in the pop-up window.

To navigate through the track, click on any place of the timeline or track itself. In addition, you can use the following buttons:

K
Kamalraj is the author of this solution article.

Did you find it helpful? Yes No

Send feedback
Sorry we couldn't be helpful. Help us improve this article with your feedback.